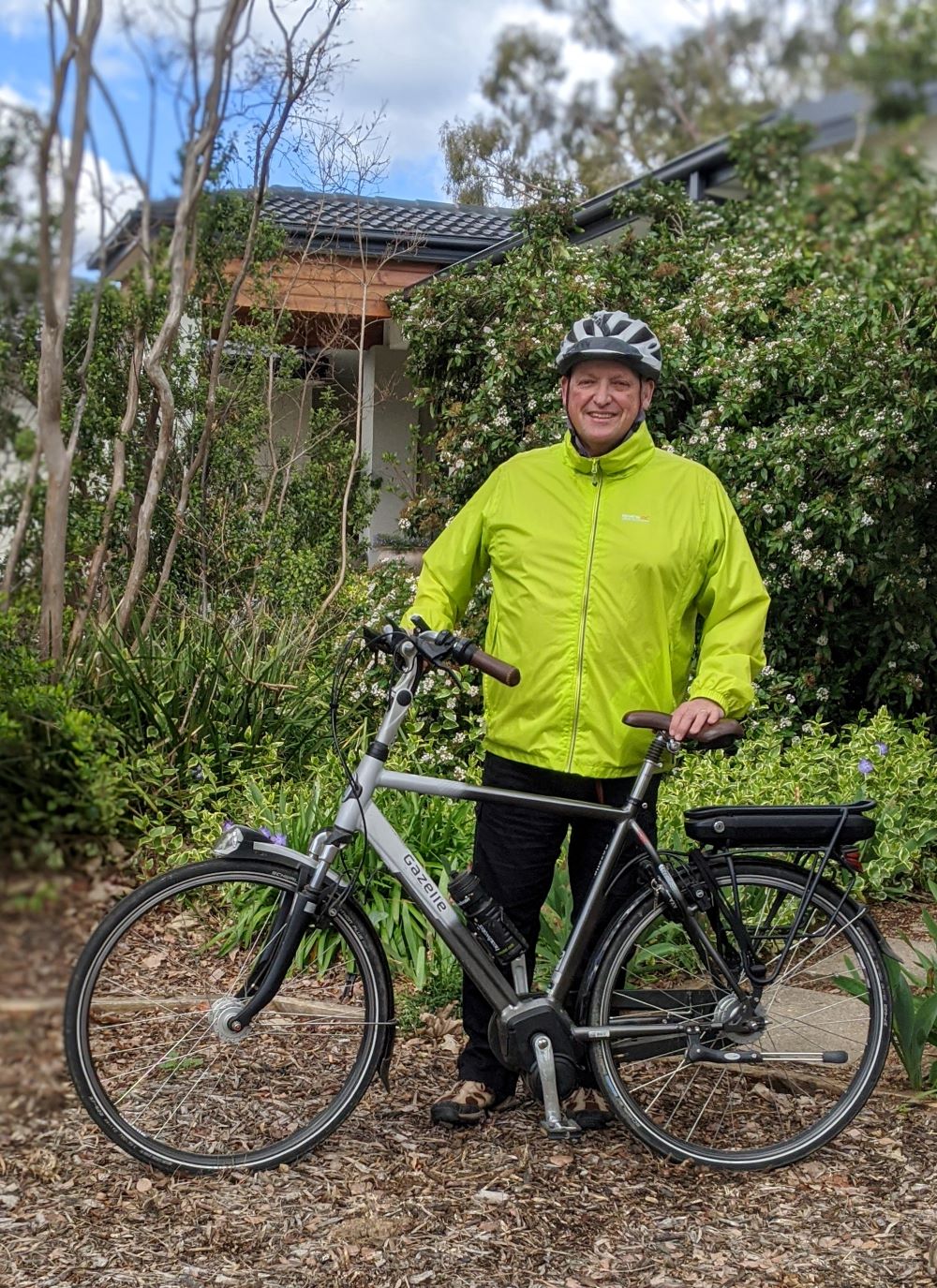 MY HEART STORY by Matthew McNeill

In October 1994 I was gasping in the Emergency Department at Woden Hospital with an erratic pulse of 220 and blood pressure 60/40. In October 2020 I am able to ride my ebike 30 kilometres three times a week at age sixty. This is my journey.

In 1994 I was a normal active 34 year old man - jogging, bushwalking and swimming, although to be fair I always carried extra weight. I contracted a virus that gave me a fever, then pneumonia, then acute viral myocarditis. I was cared for very well in Woden Hospital for ten days and was lucky to survive. I emerged very weak and scared about the future with my wife and 11 month old baby.

The team provided me with a comprehensive treatment program, including medication, regular echocardiograms and ECG, dietitian advice, and cardiac rehabilitation exercise classes. The program worked very well and I was able to return to work six weeks after discharge and write my masters thesis within a year. I remained an outpatient at the Woden Hospital for over a decade.

During the next two years my condition stabilised with dilated cardiomyopathy and permanent atrial fibrillation. Once I was stable, I only required six monthly checkups. The practical effect of my reduced heart function was to limit my exercise capacity – no more jogging, but I could walk and swim with fins. I had never smoked, so didn’t need to quit. I was a light drinker, so giving up alcohol was easy. I modified my diet, but always had a problem maintaining a healthy weight, especially when stressed. I modified work stress, taking a deliberate decision to step off the promotion ladder and seek satisfying work at a comfortable level instead. This was the best choice I made.

Rather than resenting my limitations, I chose to see them as an opportunity to rebalance my priorities. I came up with a simple maxim that I still live by every day – ‘I can’t be perfect, but each day I can do one good thing and one fun thing’. I figured that approach would ensure that I would make a decent contribution to my family and employer, while having some fun along the way. It has served me extremely well.

In January 2003 a massive bushfire hit our suburb in Weston Creek. My wife, our three children and I were evacuated. The next few days were a blur, an evacuation centre, then a hotel, then back home to clean up and help our community. The thick smoke lingered and I got weaker and weaker over two weeks. I was eventually hospitalised because smoke inhalation had affected my lungs and heart function. It took several months to recover from this, once more under the care of the Woden Hospital, with additional tests and changes to medication. My ejection fraction was in the low 30s at this stage.

During my recovery from the fires, I was invited to participate in the clinical trial of a new medication. I agreed at once, figuring that I was the beneficiary of medical science and this was a very small way to contribute. The trial involved a range of additional tests such as angiograms and blood samples. The trial medication worked well for me.

From 2010 I suffered occasional fainting, due to poor heart rhythms. My cardiologists took great care in adjusting my medication and consulting over next steps. In October 2013 Dr Tan inserted a defibrillator. This device gave me therapy in April 2015 (2 shocks), August 2016 (4 shocks) and April 2019 (6 shocks). My ejection fraction gradually worsened, until it was in the low 20s in 2019. I saw the defibrillator as a great insurance policy.

After the collapse in 2016, even though I was grateful that the device had saved me, I developed panic attacks that affected my work and limited my confidence to exercise. I sought help from a psychologist for a few sessions and we developed cognitive behaviour therapy strategies that allowed me to resume normal work, play in my band and take limited exercise, including riding an ebike. The ebike allowed me to enjoy exercise again because the electric engine helps riding up hills which I would have been too scared to do on a normal bike. I reduced my work from five to four days a week, which helped extend my working life.

I had planned to work until I turned sixty (December 2019), but after my cardiac arrest in April 2019 I was very weak and breathless. After consulting with Dr Tan, I retired from work. I was not able to drive for six months. I couldn’t ride my ebike and spent a lot of time on the couch. I relied totally on my darling wife’s practical support for the rest of the year.

In July 2019 I was referred to Dr Pathak. After a series of tests by his team, Dr Pathak held a long initial consultation with me and my wife in which he described very clearly what was happening in my heart and detailed the pathways for treatment. We were most reassured by his approach. He recommended upgrading my defibrillator to a cardiac resynchronisation therapy defibrillator (CRTD).

On 5 August 2019 I was admitted to National Capital Private Hospital where Dr Pathak attempted to insert a CRTD. After two hours of surgery the attempt was unsuccessful due to the misshapen nature of my heart. He advised that this was very rare and he would need me to have a coronary CT angiogram to obtain a detailed geography of my heart. My experience at the National Capital Private Hospital was very good, with comfortable rooms, attentive nurses and good food.

On 16 August 2019 I underwent a coronary CT angiogram at Universal Medical Imaging. This process was unremarkable and provided the additional detail that Dr Pathak needed to decide how best to proceed, which we discussed the following day.

On 16 September 2019 I returned to the hospital and Dr Pathak inserted the CRTD successfully. The operation should have taken less than two hours, but Dr Pathak persisted for more that twice that period to work through my tricky anatomy. I am extremely grateful for his skill and dedication.

Once home I had to wear a sling on my left arm and restrict its movements for several weeks, nor could I drive. I had no post-operative pain or complications in this or any other surgeries.

In October and November 2019 I started to feel stronger thanks to assistance from the CRTD. My progress was checked through echocardiograms, device checks, ECGs and a stress test. At every stage Dr Pathak spoke with me about progress and next steps.

On 16 December 2019 I underwent an ablation of my right atrium and a cardiac electrophysiology study. This study confirmed that I had a need for further surgery.

After a quiet Christmas due to Canberra’s smoke and heat, on 14 February 2020 Dr Pathak performed an AV node ablation to reduce the impact of my atrial fibrillation and thus improve the benefits from my pacemaker. This procedure also improved my candidacy for the Solve CRT clinical trial which holds the prospect of further increasing the effectiveness of my pacemaker.

Since February 2020 I have gone from strength to strength. The successful AV node ablation plus changed medications have improved CRTD effectiveness, allowing my heart to strengthen and increasing my ability to enjoy life. I can ride my ebike for two hours at a time and sing with my bandmates again. It’s remarkable.

In August 2019 Dr Pathak reviewed by progress and said that he won’t need to see me again for six months – that’s just what you want to hear from your specialist. The Solve CRT clinical trial is in suspense for the duration of the COVID 19 pandemic, and if my ejection fraction continues to improve, I may no longer need it!

Thanks for reading this long story. And that’s really the point. After becoming critically ill twenty six years ago, and despite several reverses along the way, thanks to the care of cardiology teams and evolving treatment, I have been able to work, enjoy family life and reach retirement in good shape. Dr Pathak and his team applied great skill and dedication when I needed it most. I am very grateful.