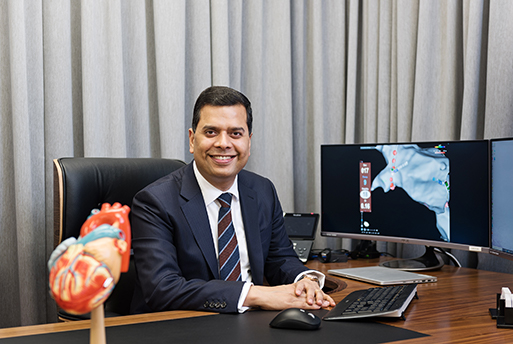 Dr Rajeev Pathak is a clinical academic and lead of cardiac electrophysiology at The Canberra Hospital. His training in Cardiology was at The Canberra Hospital before subspecializing in Cardiac Electrophysiology at the Royal Adelaide Hospital. During his clinical training under Professor Prashanthan Sanders, he completed PhD through the University of Adelaide in 2015. His PhD comprised of a series of studies on the implications of “Aggressive Risk factors management in Atrial Fibrillation” (ARREST-AF) that were awarded several accolades including Eric Prystowsky clinical research award at Heart Rhythm society (2014), Late breaking trials (2015), and Young Investigator awards at the Cardiac Society of Australia and New Zealand (Ralph Reader Award) and American Heart Association (Samuel E Levine Young investigator award). Dr Pathak was honoured with Young author achievement award (Parmley award) by the American College of Cardiology in 2016. His was awarded Doctoral research medal and Dean’s commendation by The University of Adelaide for outstanding research and doctoral thesis.